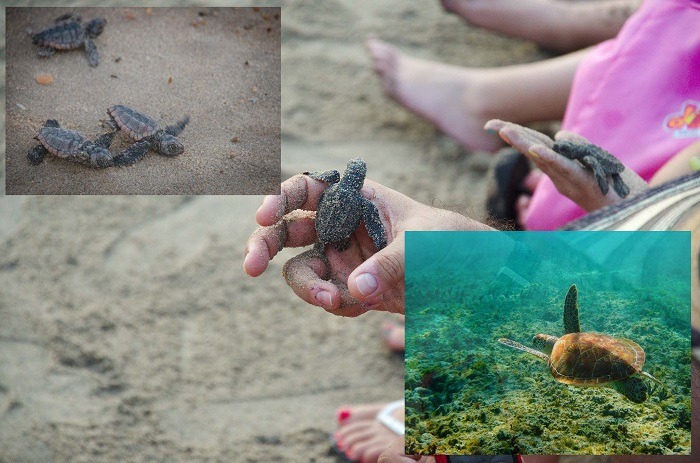 Puerto Vallarta is a great place to see baby turtles being released back into the sea thanks to a local program to protect turtles and help to increase their numbers. Tourists are often left in awe at the dozens of baby turtles that are released at any one time on Puerto Vallarta’s beaches.

Turtles usually arrive to Puerto Vallarta to lay their eggs during the night but sometimes you will be lucky to see an adult turtle arrive during the day. When a sea turtle is noticed laying her eggs in Puerto Vallarta, the authorities are notified to come and collect the eggs before predators (both humans and animal) take the eggs. The turtle eggs are then taken to a sanctuary and protected unit the baby turtles hatch.

The turtle hatchlings, as baby turtles are known, are then returned to the beaches in Puerto Vallarta where the eggs were found and released into the sea. Large numbers are released at a time to increase the chances of survival, although statistics suggest that only 1% of baby turtles make it to full maturity. This low survival rate is part of the reason why governments all over the world, including Mexico have programs to protect these endangered species.

Tourists visiting Puerto Vallarta during the baby turtle high season in summer and fall, will be very likely to enjoy a turtle release on one of Banderas Bay’s beaches during their stay. Most hotel activities’ teams will have information about which beaches in Puerto Vallarta are scheduled to release turtles each week.

Seeing Puerto Vallarta baby turtles is certainly one of the top 10 things to enjoy in Banderas Bay.